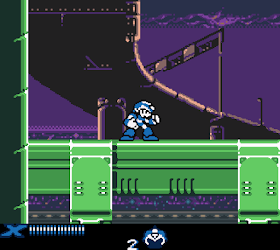 Genre: Action
Perspective: Side view
Gameplay: Platform, Shooter
Art: Anime / Manga
Setting: Sci-Fi / Futuristic
Published by: Capcom Entertainment
Developed by: Capcom Co.
Released: 2001
Platform: Game Boy Color (GBC)
The game Mega Man Xtreme takes place in the 22 century based on the series Mega Man X, in a world where people and humanoid robots called "Riploids" coexist. Everyday life is under constant threat from the side of the "Mavericks", where the Platoids turned to a criminal life. This is a series about the exploits of X and his partner Zero, the two "Hunters on the Mavericks", which are headed by the benefactor Dr. Kein. This police was responsible for suppressing the threat of robotic, criminal activities, in particular the dangerous Maverick leader Sigma. When you select Normal difficulty mode, a hacker named Techno from the group called "Shadow Hunters" break into the world of the Mother Computer, destabilizing all the networks and allowing the Mavericks to run wild all over the world. X wakes up to find herself on the highway from her first adventure to end Sigma. Realizing that this is just an imitation of replication, the protagonist meets Zero, who tells Iks that the Maverick Hunters have partnered with a computer genius named Middy to stop the madness.
With the help of Middie, X penetrates into cyberspace to erase the combat data of the four Mavericks from their previous missions. After X wins them, he makes his way to the core of the Mother Computer and wins the Shadow Hunter Zein, only to see the companions of Zein, Techno and Gimel, who retreated and Sigma presents himself as the mastermind of hacking. Dr. Kane manages to find Sigma's shelter, and X penetrates the core of the Mother Computer. In the hiding place, X confronts Techno in order to hack into the Mother Computer. Techno shows Iksu in order to crack the Mother Computer, he had to load his own processor into the computer and X destroys it. Middy arrives, showing that Techno is his twin brother. Being under the control of Sigma, Techno comes to his senses and dies. X continues the adventure and finds Sigma, defeating the Mavericks. The Core of the Computer starts to detonate, but as X escapes, Middy decides to stay, saying that he and his twin brother will share the CPU and will die next to Techno. The complex game mode partially extends the storyline where Zero tells the Isk that someone illegally made access to the record from the Mother Computer and reproduced data about the Mavericks. The heroes will soon learn that Gimel and Sigma are again responsible for this matter and are destroyed like villains in a similar way.
Storm Eagle. With the help of flapping wings, he blows the player in the opposite direction, after which he takes off and makes a diagonal jerk down, and then shoots an egg, from which, when falling on the surface, four chicks hatch.
Flame Stag. Shoots an inflow of fire, and then jumps around the room, climbing from one wall to another.
Chill Penguin. He shoots ice stones that freeze the player, creates ice sculptures in the form of himself, sometimes slides lying on his stomach over the surface and creates a blizzard on the whole screen.
Spark Mandrill. Jumps around the room, climbs the ceiling and makes a jerk, releasing a horizontally fist, and then releases the electric spheres over the surfaces.
Wheel Gator. First dives into the swamp, releasing the wheels on the surface, which move over the surface and along the walls, then pops out and jumps in the player's mouth.
Armored Armadillo. Jumps like a ball around the room and lets out the spheres from the forehead horizontally.
Magna Centipede. Teleports around the room and shoots with magnetic mines.
Morph Moth. First the moth in the form of a larva travels back and forth over the surface, then sucks in a pile of trash, spinning clockwise. Transformed into a real moth, shoots a light laser in the player in a diagonal direction.
‹
›
Home
View web version