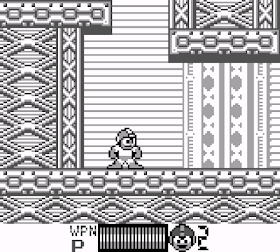 Genre: Action
Perspective: Side view
Gameplay: Arcade, Platform
Visual: 2D scrolling
Setting: Sci-Fi / Futuristic
Published by: Capcom U.S.A.
Developed by: Minakuchi Engineering Co.
Released: 1991
Platform: Game Boy
Cut Man - the main feature of the robot - the presence on his head of scissors, which he attacks, launching into the player. At the time when the scissors are launched, it can not produce any more attacks and becomes vulnerable.
Elec Man is an electric robot. Has a pattern of lightning on the stomach, and also something similar to a zipper on the head. He attacks the player with electric discharges of a very large size - more than the Mega Man itself.
Ice Man is an ice robot. The peculiarity of appearance is that he is wearing a fur coat. Attacks the player with pieces of ice.
Fire Man is a fire robot. On the head of the robot is a torch. Has the ability to produce two different attacks - shoots a fire column the size of Mega Man, the second way - Fire Man can create under Mega Man fire, wherever he was.
Quick Man is a robot with a boomerang on its head. This boss can also produce two different attacks - the first is that Quick Man can ram Mega Man, after this attack the boss makes two leaps and shoots three boomerangs on the second jump, which then comes back.
Bubble Man - the robot has a certain external resemblance to the fish, is wearing underwater glasses. Has two attacks - fires a bubble from his head, the second attack - first floats up, then down and simultaneously shoots into Mega Man.
Flash Man - The robot has a machine gun on its arm. First, he goes there and there for a certain time, then makes a flash and shoots a machine gun at Mega Man. During a flash, Mega Man can not move for a certain time.
Heat Man is a robot that looks like a walking stove, from whose lid the head sticks out. Mega Man attacks the firing lights from the head in turn. After falling into it turns into a moving fire, which is directed towards Mega Man. At this moment he is invulnerable. Then it returns to its normal state.
Enker - a robot, the main weapon of which is a shooting spear. His tactic is this: first he jumps into the opposite corner from himself (at this time he is vulnerable to attack). All the shots fired at him accumulate in his spear, from which he then shoots with such force, which corresponds to the number shot at him.
Dr.Wily is the last boss of the game. The boss is divided into two parts: the first part attacks the player with balls with spikes, the second tries to destroy Mega Man with an iron hand, and also with the help of gun shots. The second part of Dr.Wily appears after the destruction of the first.
After defeating the first four bosses, the player receives a Carry, an object that can create a platform that facilitates the painless passage of certain moments of the game - jumping to high places, crossing long spikes with spikes, etc. After defeating the Enker boss, the player gains the Mirror Buster, It can reflect enemy bullets in them.
After defeating the final boss of Dr.Wily, the latter kneels and begs not to kill him. However, at this time, his castle explodes, and he runs away from the violence. After that, the final credits are played.
Dr. Wily came back and sent old master robots to destroy him. After defeating four of them (all of Mega Man, minus Guts Man and Bomb Man), Mega Man goes to the fortress of Wily and defeats the remaining 4 (taken from Mega Man II to NES), and takes the Mirror Buster from Enker after to defeat him. Then he goes to the Wily space station to destroy it again.
‹
›
Home
View web version