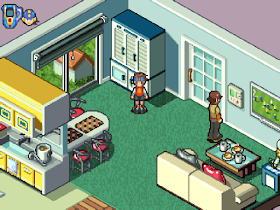 Genre: Role-Playing (RPG)
Perspective: 3rd-person
Visual: Isometric
Art: Anime / Manga
Pacing: Real-Time
Setting: Sci-Fi / Futuristic
Published by: Capcom Entertainment
Developed by: Capcom Production Studio 2
Released: 2004
Platform: Game Boy Advance (GBA)
The main characters of these games, the talented computer hacker Lan and his virtual partner Mega Man EXE. Two versions of this game. One is called the Red Sun, the second is Blue Moon. They differ from previous games of this series, as they are oriented to the system of tournaments. Defeating cybernetic enemies, the players find themselves participants in the finals and the Blue Moon. In these games there were two new systems "Soul Unison" and "Dark Soul". The first system allows players to seize the souls of previously defeated opponents, and then use their special abilities, fighting with rivals in the tournament. When a player is in a dangerous situation, a dark chip ("Dark Chip") may appear, and as a result, it will help the player to solve the problem. However, when the chips are used, Lana's program, called Net-Nevi (this program is installed in its personal terminal), allows you to become a Mega Man in a virtual world). So this program turns out to be involved, and then, as it were, the system "Soul Unisons," is turned on. The more often a similar situation occurs, the more dangerous are the negative effects that arise. In this game you can have fun with a partner using the link cable, then players can exchange programs, chips, Net-Nevis or fight with other players in the Blue Moon.
‹
›
Home
View web version