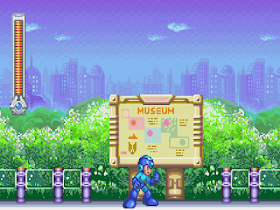 Genre: Action
Perspective: Side view
Gameplay: Platform, Shooter
Visual: 2D scrolling
Art: Anime / Manga
Setting: Sci-Fi / Futuristic
Published by: Capcom Entertainment
Developed by: Capcom Co.
Released: 2003
Platforms: Game Boy Advance (GBA), Super Nintendo (SNES)
The game ported to GBA from SNES. The set of Fitch is almost standard for the Mega Man series. However, there will be several new products. There was an opportunity to play for Bass`a, and the base of robots from the previous parts with nice graphics. If you remember a bit of history, then Bass first appeared in Dr. Willy 7, as the opposite of Mega Man from the side of evil. He was smart and began to collect weapons, chips and trained a lot. In this part in Bass and Mega Mana, the common enemy is King.
‹
›
Home
View web version