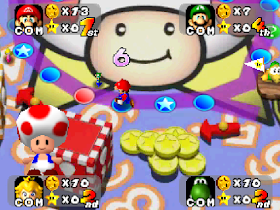 Genre: Action, Strategy / Tactics
Perspective: Bird's-eye view, Side view, Top-down
Gameplay: Board Game, Mini-Games, Party Game
Visual: 2D scrolling
Pacing: Turn-based
Interface: Direct Control
Sport: Boxing, Fishing, Football (European) / Soccer
Setting: Fantasy
Published by: Nintendo of America Inc.
Developed by: Hudson Soft Company
Released: 1999
Platform: Nintendo 64 (N64)
The first part of the fun entertainment game. Mario and his friends compete on maps that somehow resemble a monopoly. But there is no need to buy businesses and build houses. Heroes must collect the Golden Stars, and only those who, for a certain number of moves, will collect the largest number of them, will be declared the winner. After all the players make a move, they participate in the mini-game, and there are a lot of them in the Mario Party, from simple to complex. The game is very interesting and relaxing.
‹
›
Home
View web version