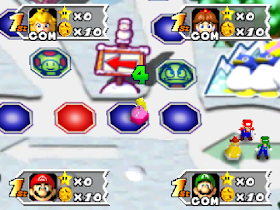 Genre: Action, Strategy / Tactics
Perspective: Bird's-eye view, Top-down
Gameplay: Board Game, Mini-Games, Party Game
Visual: 2D scrolling
Interface: Direct Control
Pacing: Turn-based
Setting: Fantasy
Published by: Nintendo of America Inc.
Developed by: Hudson Soft Company
Released: 2001
Platform: Nintendo 64 (N64)
The best of the series Mario Party. The number of mini-games has increased, they have become diverse and even more interesting. Passage of cards also became more thoughtful and complex. The main goal is the same - on each card you need to earn as many Gold Stars as possible, or to defeat your opponent in the duel card mode. The third part of the party Mario came out the next year. The principle of the game is the same. Of the merits of this game is to note the stunningly beautiful graphics.
‹
›
Home
View web version