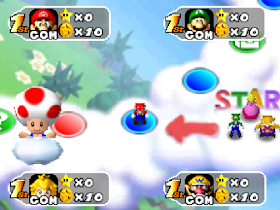 Genre: Action, Strategy / Tactics
Perspective: Bird's-eye view, Top-down
Gameplay: Board Game, Mini-Games, Party Game
Visual: 2D scrolling
Interface: Direct Control
Pacing: Turn-based
Setting: Fantasy
Published by: Nintendo of America Inc.
Developed by: Hudson Soft Company
Released: 2000
Platform: Nintendo 64 (N64)
Continuation of the game. It became even more interesting to play, the creators of the game will not make you bored. The goal is to collect the Golden Stars. Moving on the map, the characters can use different useful things, in mini-games directly before the game itself you can practice to quickly understand what is required to do. Everything is done very well and with a fair amount of humor. The first part of the original game was warmly received by the owners of Nintendo 64, so it was decided to release this sequel.
‹
›
Home
View web version