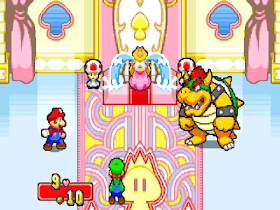 Genre: Action, Role-Playing (RPG)
Gameplay: Puzzle elements
Visual: Isometric
Published by: Nintendo of America Inc.
Developed by: AlphaDream Corporation
Released: 2003
Platform: Game Boy Advance (GBA)
When the witch kidnapped Princess Pitch from the clutches of Bowser and went with her to the neighboring world, an angry Bowser agreed to join the two brothers to save the princess. However, things did not turn out as planned, and when the ship on which our trio had an accident crashed, they were in different places. Fortunately, Mario and Luigi were close enough to each other and now they continue their journey with or without Bowser. Players can control each character individually or with the whole team, battling enemies using various techniques including such exotic ones, when Mario, pushing against Luigi's back, performs a very powerful leap, as if from a springboard. Contractions are in real time. Players earn experienced glasses in them. Both Mario and Luigi discover a variety of objects that can be used in combat; solve together complex puzzles, meet along the way well-known, as well as new characters and, in the end, get to the castle of the witch.
‹
›
Home
View web version