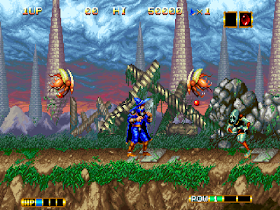 Genre: Action
Perspective: Side view
Gameplay: Platform
Visual: 2D scrolling
Setting: Fantasy
Published by: SNK Corporation of America
Developed by: Alpha Denshi Kogyo Co.
Released: 1991
Platform: Neo-Geo
The player can play with the magician named Elta who needs to retrieve the eight books of the evil sorcerer named Gal Agiese. Elta can also take various forms and increase her magic. They are in all eight phases and each stage has a sub-boss and a boss. The novelty is that Elta may be able to collect coins or diamonds to increase her score.