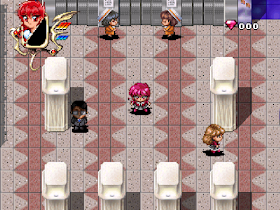 Genre: Action
Perspective: Top-down
Art: Anime / Manga
Setting: Fantasy
Published by: Working Designs
Developed by: Sega AM7 R&D Division
Released: 1998
Platform: SEGA Saturn
For the whole game, the player controls a group of three characters, although during the fights only one character can be used at a time, the others are "inactive" and behind the chosen character. The other two characters are also immune to enemy attacks while they are "inactive", but they can be called back to the game by the player at any time and can replace each other in the combat phase.
Unlike most RPGs, character evolutions and spells are mainly acquired at a particular point in the game, rather than independent achievements. (The exceptions are HP and MP that are augmented by finding special items).
While in anime and manga the characters have spades coordinated with their own colors (Hikaru Red Sword, Blue Umi-Sword and Fuu Green Sword), in Fuu's game use only the bow and arrow and umi a foil. Each weapon in the game has its own advantages and disadvantages. For example, the bow works long range, but requires precise aim, while the sword becomes easier to hit the enemies, but in short reach. Unlike the sword and foil, the attack power of the bow does not increase when it is charged.

The overall plot is very similar to the first arc of manga and anime history, with Hikaru Shidou, Umu Ryuuzaki and Fuu Hououji are teleported from the Tokyo Tower to Cefiro. There, the Guru Clef informs them that to return to Tokyo, they must become Magical Warriors and save the current pillar of Cefiro, the princess Emeraude of its abductor, the high priest and antagonist Zagato.
All the characters in the first arc of the manga are present in the game, also Innova, the unique character of the anime. However, the game features several new locations and new characters, greatly expanding the overall storyline.
The player can also read each of the Magical Warrior '' magazines '', which provide their individual insights into the events that occur during the phases of the game.
Unlike the manga and anime, all Zagato minions die throughout the game, including Ascot, Caldina and Rafarga.
‹
›
Home
View web version