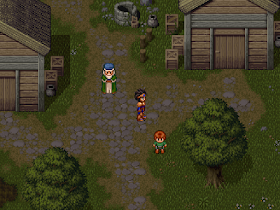 Genre: Role-Playing (RPG)
Perspective: Isometric
Pacing: Turn-based
Art: Anime / Manga
Published by: SEGA Enterprises Ltd.
Developed by: Compile
Released: 1998
Platform: SEGA Saturn
Perhaps, one of the most beautiful RPGs on Saturn. The game came out at the end of the console's life, and it's clear that the developers tried to squeeze out of its iron all the juices.
The beginning of the game is very mysterious and mysterious. A certain hero goes to the sorcerous tower to fight evil. Night in the yard, thunder roars, lightning rumblings periodically illuminate the road. To get to the peak of the tower, you must first defeat several guards. And so, on the way of the hero the main villain, the victory over which will be just a prologue, because the game is just beginning.
‹
›
Home
View web version