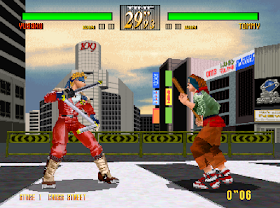 Genre: Action
Perspective: 3rd-person
Gameplay: Fighting
Published by: SEGA Enterprises Ltd.
Developed by: Sega AM3 R&D Division
Released: 1997
Platform: SEGA Saturn
The game uses the technology of Virtua Fighter 2, it looks very similar except that its characters and their fighting styles are distinguished by the fact that they carry different weapons. He offers fights with weapons in closed arenas just like Fighting Vipers.
The animation of the characters was made in motion capture, and the movements of the weapons are accompanied by a stroboscopic effect.

The fight is based on the sequence of attacks. It is possible to follow in a multitude of combinations involving the movement keys and the combat keys. Each character has their own combinations, but similarities can be encountered.
It is always possible to protect yourself. High protection blocks all high attacks and crouching protection blocks low attacks. However, it is impossible to move when you protect yourself, and the opponent can put you down by throwing.
‹
›
Home
View web version