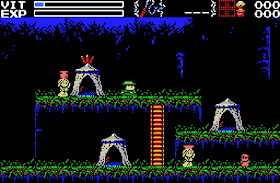 Genre: Adventure
Perspective: Side view
Gameplay: Metroidvania, Platform, Puzzle elements
Setting: Contemporary
Developed by: Pepe Vila
Platform: MSX
La-Mulana is a retro game in the genre "Metroidvania", intentionally copying the style of games for MSX computers, a simple graphics, and also containing a lot of allusions to other games on this platform. Mostly written under the influence of "Maze of Galious" - one of the first explorational platformers with the open world.
Lemeza Kosugi, a professor of archeology, receives a letter from his long-lost father, Sean Kosugi, also an archaeologist. In the letter Sean with triumph informs that he finally found the ruins of the ancient city of La Mulana - the cradle of all civilizations that had ever existed. Obscured by scientific jealousy, Lemesa makes her own journey into the mysterious ruins.
La Mulana is indeed the cradle of many civilizations, including those that existed before the appearance of people. Once, a mysterious creature fell into this place from Heaven, which in the game is respectfully called the Mother. Mother wanted to go back to Heaven, but her body was so huge that she could not even move. Actually, the ruins of La Mulan are part of her body. The mother had the ability to give birth to life, and since she could not return home, she created different races, in the hope that they would help her to reach Heaven.
Not much is known about the races themselves. The Fourth Race was a race of fishermen; to the Seventh there were four Magi, with whom, in the course of the game, they had to deal with Lemese; in fact, people are the Eighth Race. Most of all we know about the Second Race, very few, consisting, apparently, of nine giants.
Part of the giants, fulfilling the request of the Mother to return it to Heaven, built a flying tower. Toward the end of the game, the protagonist gets into this tower, and it looks more like a spaceship - with electricity and monitor screens. Another part of the giants, not wanting to release Mother from Earth, entered into conflict with the first. Exhausted by the war, many giants fell and fell asleep forever. The survivors tried to make the tower function - for this, water was needed. Therefore, two giants moved the lake closer to the tower, and the third dug a tunnel between them. These efforts completely depleted the gigantic forces, and they also fell asleep eternally.
The structure of the ruins is mysterious enough. The areas inside the ruins are divided into front and back. Each frontal region is guarded by the Guardian, having defeated it, Lemez gets access to the corresponding turnaround area (plus for this, a special artifact, a magic mirror is needed for the trip). The reasons for the split of the world into two parts in the game are not explained in any way. In addition, the two Sentinels are so powerful that they partially change the above-described structure of the ruins - Baphomet unites the frontal and the reverse part into one whole, and Tiamat - changes them in places.
The true purpose of the ruins can only be guessed. The Mausoleum of the Giants and the Giants Cemetery are the places in which they lived and were buried. The spring in Heaven and the Tower of the Goddess, as already mentioned - the creations of the hands of the giants. The remaining areas of clarity less. Birth Chambers, apparently - the place where all races were born, but it is not clear why its reverse side is called the Chambers of Annihilation, and is described as "the place of a great battle". In the Caves of the Underworld, you can find a few hints that this place used to be a source of energy; the reverse side - the Tower of Ruins - is described as "shards of a shattered dream." One can only assume that they meant the ruins of another unsuccessful attempt to send Mother to Heaven, but here we are already entering the field of conjectures. However, in other areas, even for guesswork information is not enough.
In her travels through the ruins, Lemez awakens the four Magi, the representatives of the Seventh Race, who also tried to bring Mother back to Heaven, but eventually abandoned those attempts. The Magi explain to the protagonist that it is impossible to fulfill the Mother's desire, and all that he is capable of is to grant her peace, destroying her soul. In order to do this, Lemez wins eight Guardian souls, pierces the ruins of her body with eight stakes, brings to life her soul, with the help of the Elixir of Life, and destroys. At this game ends.
‹
›
Home
View web version