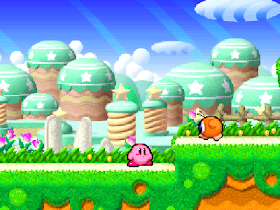 Genre: Action, Compilation
Perspective: Side view
Gameplay: Arcade, Platform
Published by: Nintendo of America Inc.
Developed by: HAL Laboratory
Released: 2008
Platform: Nintendo DS (NDS)
The most popular and favorite game from the series of adventures of a round pink creature named Kirby is reborn on the Nintendo DS platform. New graphics and fully animated videos, a lot of adventures already familiar to fans, as well as completely new ones - there's no time to be bored, because Kirby flies again, flies, turns into defeated enemies and uses the help of assistants in the battles with King Dedede and Meta Knight. New game modes like "Royal revenge" or "Ultra-meta-knight", along with such time-tested classics as "The Great Standing by the Cave" and "The Milky Way of Desires", await brave players who love unusual and funny stories. To play with friends, the creators prepared completely new mini-games designed to use the second screen of Nintendo DS and combine up to four players simultaneously through the DS Download Play function. And with two cartridges and prefixes, you can go through the game together with a friend.