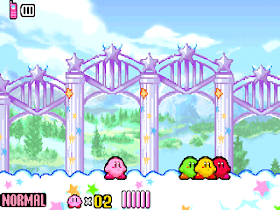 Genre: Action
Perspective: Side view
Gameplay: Metroidvania, Platform, Puzzle elements
Visual: 2D scrolling
Published by: Nintendo of America Inc.
Developed by: Flagship Co, HAL Laboratory
Released: 2004
Platform: Game Boy Advance (GBA)
This is the last game in the series for this console, and the only one where the King Dididi is absent (before the release of the game Kirby and the Rainbow Curse, where he appears only with the help of the amiibo figure). Kirby & Amazing Mirror is an adventure game, not a linear side-scroller. The game is similar in gameplay to The Legend of Zelda: Four Swords - a game also published by Nintendo and released at about the same time. Both are multiplayer adventure games that use the concept of the main character, divided into four color versions and working together to solve puzzles. Kirby & the Amazing Mirror is re-released in Europe, exclusively for members of the Nintendo Club. The game is also notable for the fact that even the fastest passes take at least 45 minutes.

Unlike other Kirby games, Kirby & the Amazing Mirror is a labyrinth mockup and is designed in the style of Metroid and Castlevania. The game map contains zones located in different directions, Kirby can go anywhere for any purpose, except for the last sequence. If a player gets access to all mirrors (except for one player who collects shards), then he gets access to a new mirror with the possibility of using the full Copy Pedestals pedestal.
The player explores the world, solving puzzles, battling enemies and collecting items. Sometimes he meets a mini-boss, after the victory over which he will be able to continue the journey. Swallowing a mini-boss gives a rare ability. At the end of world 2-9, the main boss appears, whom the player must defeat in order to get a shard from a broken mirror in the Mirror Room. Before each boss, in the hallway there is no music for a dramatic effect. In the hallway, as a rule, there are objects that restore the health of the hero and pedestals of spears. The player can also get into the "rest room", where he can listen to music played in the Mirror Room. There is usually one or two pedestal spears in one location. Some recreation areas are part of a system that returns back to the Mirror Room, and can be connected via giant buttons, sometimes located in the room itself, but often elsewhere in the world.
The player can collect items to improve the performance of the game, in particular additional points of health and life, power to restore life and batteries for mobile phones. The game also has two collections - the music, namely the sound test, for this you need to collect the details of the music player and the color - the paint splashes, which can be used to recolour Kirby. Both collections are available in the main menu. There are also three mini-games in Kirby & the Amazing Mirror. in which you can play both in single and multiplayer mode.
The game has multiplayer and the player can call other players or Kirby, controlled by a computer using a mobile phone. Three of the four Kirby are controlled by a computer, but connecting another player with the Game Boy Advance (it should contain a game cartridge), brings into the game a cooperative multiplayer to improve teamwork and more quickly pass the level. In Amazing Mirror, new abilities appear, such as Cupid (known as Angel in Japan), which allows Kirby to fly on the wings of an angel with a halo on his head and shoot fire arrows. Missile - A missile can be aimed in any direction and explodes when it comes into contact with a wall or enemy or when you press the B and Smash buttons, giving Kirby the abilities he used in Super Smash Bros. Melee. In addition, now Kirby inhale larger objects while holding the corresponding button, but can not inhale for an unlimited amount of time, he needs short pauses.

The game features 9 "worlds", each of which has an alliterative name, with the exception of the last zone with the final boss:
‹
›
Home
View web version