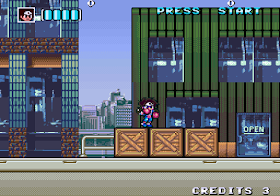 Genre: Action
Perspective: Side view
Gameplay: Arcade
Visual: 2D scrolling
Art: Anime / Manga
Setting: Sci-Fi / Futuristic
Published by: Masaya
Developed by: NCS Corporation
Released: 1997
Platform: Super Nintendo (SNES)
Before you start the game itself, you will need to select the main character. And there is really no choice - the first joystick automatically includes you as a boy, and the second - a girl. Yes, the developers blundered here, but these are trifles. So, meet:

Not a bad boy. Very sociable. He does not like to be stared at. Likes to fight. In combat, he plays with energy boxing gloves - he will not hesitate, he will not seem a little.

A girl who better not be angry. On duty, he starts with a cold weapon - a sword (stolen from a local museum). Rid of the excess parts of the body can not only on the ground, but also in the air.
Having dressed in a combat spacesuit, your hero will have to walk through the streets of the city, passing along all sorts of Galco's henchmen with savory blows (you can fire a fireball too). At the end of the level, as usual the local leader will be waiting, and with some of them you will meet repeatedly (but they will become much stronger and faster - one such nevalyashka is called Kagemaru). In fact, nothing special - just a high-quality standard with a well-designed control - during the game there is no feeling that the hero is a thermos and a brake at the same time (and many games of this type suffer this particular problem). One can not help but mention that after the death of ordinary opponents, there are all kinds of bonuses (hello from the platformer) - often coins, but sometimes even computers, prefixes (with Super Nintendo) and other electronics - look very funny. Also, among this junk, sometimes very useful things come in - a rejuvenator of vital energy and an extension of the life scale.

The action takes place in one typical Japanese town. Galko - the leader of the local gang again raged, threatening to smash the whole city at all, simultaneously bursting into a hysterical laugh (and how without it?). And this time the plan was carefully thought out - the offensive began just during the lunch break of the city's debris. Yes, her plan was perfect. It was, because the nail in the heel once again became the laughter of Galko - schoolchildren Raita and Azuki, after hearing it, decide to find out who it is there again "cut". We did not have much time to rejoice in our villain, for these two after the lessons work as militiamen (which you will not go for money), more precisely Shubibinman. A short phrase, and the school uniform immediately replaces the battle suit.

I must say at once that there will be no censures. Everything for people, namely - for gamers. A beautiful anime graphics, backed up by a chic design of the backgrounds (of course, there is a moving background) and detailed objects.
As for the animation, then here too the candy turned out. Smooth movements, both main characters and enemies. The developers also remembered humor about the humor - during the impact of some opponents, the eyes get out of the orbits in the literal sense of the word (if you do not believe, then look at the introduction), you can also "grab" the pick with your head (or another part of the body) and run around in such a condition for a few seconds. Between the levels there are videos, again filled with humor. And in general, look at the enemies themselves. In a single phrase, it's funny to us - it's nice to our eyes.

Yes, if there were no such dynamic music here, the game would lose half of its appeal. The rhythm of the melody just makes it rush to hordes of enemies, while cutting everyone under the nut, remaining unscathed. So what, and crush the skulls in time with the music is a very pleasant thing.
The voice acting is also at a decent level. Blows, death cries, etc. Especially funny sounded the last sob of the typical yellow oboludya in a mask - this feeling arises that he suffered a fatal blow directly at the "destination."

This game can be easily recommended to novice players. Yes, many probably already sighed heavily - again the kindergarten was slipped. Not really, because it was calculated directly for recreation and entertainment, rather than hardcore passage. And therefore the high complexity here is superfluous (but this does not mean that you will pass it with one hand, having closed the cross with tape). The developers decided to give out everything about all 4 lives - regardless of whether you play alone or with a partner - 4 at all (including the starting appearance).
I would also like to note that the second player can join at any time (if at least one continue remains). A trifle (though not a new one), but thanks to it, if a partner suddenly came to visit you (also, incidentally, loaded all day), then you do not have to start the game at first.

At the exit we got a very high-quality game (with excellent gameplay and musical accompaniment), which will adequately brighten up your free evening, gradually returning vivacity and good mood.
‹
›
Home
View web version