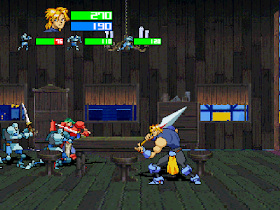 Genre: Action, Role-Playing (RPG)
Perspective: Side view
Gameplay: Arcade, Beat 'em up / Brawler, Fighting, Martial Arts
Visual: 2D scrolling
Setting: Fantasy
Published by: SEGA of America
Developed by: Treasure Co.
Released: 1996
Platform: SEGA Saturn
The game allows the player to change the story from their actions; actions like choosing one of several possible paths change the end of the game, just as killing civilians and enemies generates changes in the karma meter. The music of the game was composed by Hideki Matsutake, a former member of the band Yellow Magic Orchestra, and Nazo Suzuki. It is considered a cult classic of the beat 'em up genre.

In addition to Story mode, the game features a versus mode that supports up to six players in combat using any of the main characters (as well as monsters, bosses, and civilians unlocked) in battles with time or even death.
Players gain experience points at each scene, and enter scenes can enhance and customize their characters on the six attributes: Strength (determines physical damage per hit and distance enemies fly when hit), Vitality Life, Intelligence (rules the size and strength of spells), Mentality (determines how many Magic Points the player has and how fast she can recover), Agility (determines the speed at which characters can make physical and magical attacks) and Luck (modifies the damage players give and receive, as well as enhancing Nicole's selection of spells).
Story mode has multiple routes. Players can choose where they will go and what they will do after each stage. Different routes lead to different endings, bosses and stages.
The battlefield has multiple planes. Initially, the player can only access three battle planes: a previous plan, a middle plan and a later one. The player can switch between plans in sequential order, or at the player's choice according to the button pressed. Often you can change your plan as an evasive action.

Long before the events of the game, a superhero created the universe to find the best warriors, to serve as personal soldiers. During this time, humans simply followed their lives in fear of the battle waged by the spirits of heaven and earth. Over time, the spirits of the sky decide to grant incredible powers to humans, turning many of them into powerful sorcerers. With such resources, human magicians unite with earth spirits and manage to banish them all into darkness. Soon after the event, the spirits of heaven begin to fear human magicians and banish them to the same darkness that shelters the spirits of the earth. Thus, mankind is forced to take a more physical approach in their life and the Age of the Sword begins.
One of the human magicians, Kanon, manages to escape from his prison with the spirits of the earth and decides to take revenge on the spirits of the sky. He makes a proposal to the Khans, who are destroyed by denying it and being replaced by a kingdom of wizards. Not everything is perfect in Kanon's plan, though: a prophecy of the ancient king relates that the Age of the Sword will come to an end soon, and that one of these swords would bring Kanon's kingdom to an end. Therefore, Kanon forbids the use of swords in his kingdom, but does not know of the existence of a sword belonging to an anonymous warrior who fought to the death during Kanon's attack. In addition, the old princess, Serena, survived, and gathers a band of knights to try to bring an end to Kanon's oppression.

Strong physically, Han can deal damage to his opponents even under defense, but his movements are slow and he does not know many spells. It also has a fire attack, similar to Ginjirou's lightning strike. Han begins the game with Undead Hero's sword until he recovers it. In one of the ways of history, he obtains a similar sword that guarantees the same bonuses to his attributes.

Randy has spectacular attacks and a variety of elemental spells, but suffers from low vitality. Randy's relative, Nando, assists Randy in battle.

Ginjirou has great mobility and many attacks on the move, in addition to several thunder attacks.

Nicole has weak attacks and random magic. It is the only character that can use healing spells, but in compensation has the weakest blows of the game. She also possesses a magical barrier, sometimes capable of injuring her opponents.

Balanced character, Serena has a wide range of punches and a good selection of spells, largely based on ice.

According to former Treasure designer Tetsuhiko "Han" Kikuchi, the Fill-in-Cafe games, Mad Stalker: Full Metal Force, and Alien VS. Predator, a Capcom arcade game, were the main inspiration for Guardian Heroes' design. When asked why Treasure chose to develop a 2D game when video game sales were dominantly 3D games, and when almost all game developers for Saturn focused strictly on 3D games, a Treasure representative commented: Treasure has developed a gigantic knowledge with the use of 2D sprites.It is an advantage that we would like to keep ... No, we do not think this would be risky.There is actually a risk when trying to create a new game. tried and failed to create good 3D games, and another, 2D and 3D games can coexist without problems. "
For the XBLA release, Tetsuhiko Kikuchi came back to create new illustrations and help with the development.
‹
›
Home
View web version