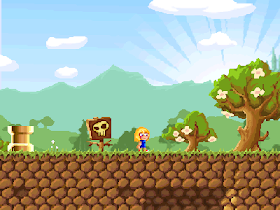 Genre: Action
Perspective: Side view
Visual: 2D scrolling
Gameplay: Platform
Published by: Destineer
Developed by: Bitfield GmbH
Released: 2011
Platform: Nintendo DS (NDS)
Giana Sisters DS is a Jump 'n' Run game released in 2009 for the Nintendo DS. It is a sequel to the Jump 'n' Run classic The Great Giana Sisters and contains 80 levels spread over eight worlds. The music consists partly of remixes of the original music, partly of new pieces. Armin Gessert, the programmer of the original game, was an executive producer involved in the development.
As in the original, Giana Sisters DS also has the punk upgrade: After collecting points, Giana's hair turns red and she can now destroy blocks by jumping from below. In addition, she can fire energy balls against opponents. Other upgrades were not taken from the original, as well as Maria does not appear. Instead, two new collectable items have been added, soda bottles and chewing gum. They are displayed on the touchscreen after collection and can be activated by touch. The soda bottle produces a jet of water that can be used against opponents or clearing out destructible blocks. The chewing gum is used to form a large bubble that helps Giana fly. The bubble can either be controlled normally via the buttons or by blowing into the Nintendo DS microphone.
At the end of each world, a boss fight against a dragon is waiting, which gets more and more difficult the further you progress in the game.
By collecting red diamonds you can unlock a bonus level per world. The bonus level in the last world is a remake of the original level from Giana Sisters.
‹
›
Home
View web version