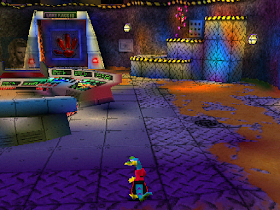 Genre: Action
Perspective: 1st-person, 3rd-person
Gameplay: Platform, Puzzle elements
Published by: Eidos
Developed by: Crystal Dynamics
Released: 1999
Platforms: PlayStation (PSX, PS1), Nintendo 64 (N64)
Old Gex, who started his way to fame for the now-deceased 3DO, and who continued on our PlayStation, is preparing his third appearance on the prefix from Sony. Gex 3: Deep Cover Gecko - a new series of adventures of a green lizard. Like Enter the Gecko, the third Gex runs in full 3D and is based, by the way, all on the same engine from the previous project. He recommended himself not bad, and therefore on it besides Gex 3 is based a number of other products, such as Akuji the Heartless and Legacy of Kain: Soul Reaver. In the game we are waiting for the old enemy, known as Rez, mending various obstacles in the path of a brave reptile. This time our noble goal is to save an unlucky fellow, or rather a friend, a secret agent named Xtra. Gex 3 includes about twenty-five different levels, completely different from each other in the situation. You will visit the North Pole, where you are already waiting for the evil twin of Santa Claus - a certain Satan (translated if you do not know how Satan). Fate will also throw you into a fairy country populated by Shtltai-Boltas and large wicked wolves (each, however, is present in a single copy), on a pirate ship, in the era of the Wild West. Hex has learned to change costumes depending on the world in which he is. Depending on the dress, the ability of the lizard also changes. So, for example, the costume of Hercules will give him strength, which can not help but at the pirate level our hero gets the opportunity to use a hook replacing him with one of the hands (paws).
Question: I really love this old game, but, unfortunately, I do not succeed. In the room of the Clueless room (Mission control) I found coins Paw Coin and In Coin on two high cornices, but I can not imagine how to get there.
Answer: If you stand exactly under the crocodile and look (holding the Triangle button) on the vampire's picture, then Gex will turn into a vampire. However, even having a floating ability, it is not easy to get to these tall balconies. You have to tail tail carefully to fly to the vampire's picture, then push it off again (which is not easy) to gain more altitude and then, holding the R2 button, plan to the balcony where the vampire is located coin Paw Coin, and from there, once again pushing back with his tail, plan for another balcony, where you will take a coin B-Coin.
Invincibility:
Put the game on pause, then hold L2 and type Down, Up, Left (x2), Triangle, Right, Down. The sound will confirm the correctness of the code.
Citations (replicas) of Hex:
Put the game on pause, then hold L2 and type Down, Right, Left, Circle, Up, Right. The sound will confirm the correctness of the code.
Debug menu:
Put the game on pause, then, while holding R2, press Up, Circle, Right, Up, Left, Right, Down. Resume the game, press Select to display a list of options, including Level Select, collectibles, sound debug, and others. For the PAL version of the game - put the game on pause, then hold L2, press Up, Circle, Right, Up, Left, Right, Down.
‹
›
Home
View web version