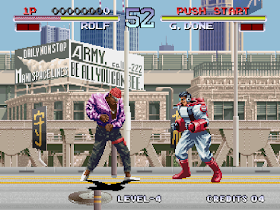 Genre: Action
Perspective: Side view
Gameplay: Fighting
Visual: 2D scrolling
Setting: Sci-Fi / Futuristic
Published by: Sun Corporation
Developed by: Sun Corporation
Released: 1995
Platform: Neo-Geo
Although Galaxy Fight is similar to Waku Waku 7 (which uses the same engine), the games have few elements in common (one being the mid-boss, Bonus-Kun). Players choose one of eight characters and travel between the in-game solar system to defeat the adversaries that inhabit each of the planets before they have the possibility to fight against Felden and resolve their personal scores with him.
The game uses a four-button design where the first three buttons are used for specified non-striking attacks (they can be anything from drilling and kicking to tail whips and bites) with each specific button that yields different attack strengths. The fourth button is used specifically for taunts which has no practical impact. Combining several buttons together can yield new attacks or special moves that depend on the character.
In this game there is no wall in the scenarios to corral the players; instead, the screen will move its scroll indefinitely.