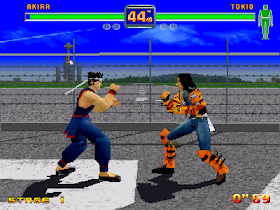 Genre: Action
Perspective: Side view
Gameplay: Arcade, Fighting, Martial Arts
Visual: 2D scrolling
Published by: SEGA of America
Developed by: SEGA-AM2
Released: 1997
Platform: SEGA Saturn
At one time a thoroughly advertised game, conceived as the forerunner of Virtua Fighter 3. Fighters Megamix uses a concept from King of Fighters: a combination of characters and styles from different games. Included as open rings a la Virtua Fighter 2, as well as closed arena cells according to the example of Fighting Vipers. The characters from VF have new movements, taken from VF3. The most noteworthy was the movement of the slope sideways, serving simultaneously to avoid a dangerous blow and to gain an opportunity for a counterattack. Sega took advantage of this innovation in advertising, calling Fighters Megamix the first fighting game in "real 3D". Unlike most AM2 games of that time, Fighters Megamix did not go out on arcades. In 1998, Tiger Electronics released a port on the Game.com system.
Along with the standard modes of Survival, Paired Game and Team Battle, Fighters Megamix contains an unusual single section, replacing the standard arcade mode; this section is divided into 9 subsections:
In each section there are 6 fights with regular characters and the final battle with a hidden character. Passing the first 4 "standard" sections, you can go to the 3rd following, after them - to the penultimate section, from there - to the last one.
It is possible to switch between Fighting Vipers and Virtua Fighter, not only for the player, but also for the computer. This allows you to fight in the style of a game. The default style is Fighting Vipers.
‹
›
Home
View web version