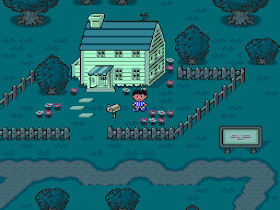 Genre: Role-Playing (RPG)
Perspective: Bird's-eye view
Gameplay: Japanese-style RPG (JRPG)
Visual: 2D scrolling, Isometric
Art: Anime / Manga
Setting: Fantasy, Sci-Fi / Futuristic
Narrative: Comedy
Published by: Nintendo of America Inc.
Developed by: Ape, HAL Laboratory
Released: 1995
Platform: Super Nintendo (SNES)
One of the greatest implementations of all time is from Nintendo and Ape. Earthbound was the most unique game of its time. Recommended for all fans of decent and original games on Super Nintendo. A meteorite that fell deeply in the middle of the night awakens the boy Nessa, 13 years of age. After several events, a small insect called Buzz Buzz emerges from the meteorite. He talks about the evil Giygas, another alien creature who wants to destroy the Earth. Then our adventure begins. At first glance, the story is not so unique and even ordinary! But more and more events envelop our heroes, more and more there are all kinds of oddities and, the more you play, the more the story gets better and better. There are all kinds of twists and turns in the storyline that would not be fair here to tell. You must learn everything yourself! This is a great game. The story deserves the highest marks. Each character has its own look and personality. Graphics cartoon. She is bright and cheerful and perfectly betrays the whole atmosphere of this work. As for the music !? Here is one of the best 16 Bit soundtracks. This game changed the meaning of the RPG. You should definitely try this game. Even today, you will find little in videogames such a unique concept. There is practically nothing to compare it with. You can continue to describe such a beautiful work of art, but if you describe it in one word, it would be - "Brilliant!"
‹
›
Home
View web version