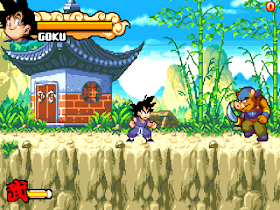 Genre: Action
Gameplay: Fighting, Platform
Art: Anime / Manga
Published by: Atari
Developed by: Dimps Corporation
Released: 2006
Platform: Game Boy Advance (GBA)
Once, a great journey began far away in the mountains. The young Goku did the training, but the girl's coming interrupted him. Bulma, pleasant, strong and strong-willed, saw how Goku guarded the souvenir ball, made him one offer ... It was a wonderful ball, with a star inside, which had the name Dragonball. It was not an ordinary subject, but if all seven of them are gathered together, then the Eternal Dragon will be able to fulfill one thing, any desire. So began the journey of Goku and Bulma, who wanted to fulfill their desire, after finding Dragonball. Choosing one of three types of difficulty, you immediately go to the basics of the body, through a lot of fights. Using your pole and hands, you can carry out various attacks: a punch, a pole strike in a jump, a kick in a jump, a swing on a rotary axis with a pole, a throw over a pole. The main attacking movement will be an overblow, the most powerful swing of a pole in a large range. Hamburgers, apples and other useful items, restore your vitality. Red dots on the ground, while clamping certain buttons, will allow your pole to extend many times to achieve maximum height. The abyss, with a sudden fall in which, completely deprive you of life, which are limited in this game. Enemies are divided into several types, leading melee attacks, long-range, as well as air. At the end of each of the levels you will meet with the boss, which is more similar to the genre - fighting, and the transition to the next level, by means of free choice and use the map of the global world.
‹
›
Home
View web version