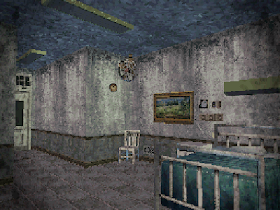 Genre: Action
Perspective: 1st-person
Gameplay: Shooter, Survival Horror
Narrative: Horror
Published by: Gamecock Media Group
Developed by: Renegade Kid LLC.
Released: 2007
Platforms: Nintendo DS (NDS)
The player moves through an abandoned hospital, collecting items, solving puzzles and battling monsters on the way. The world of the game itself is revealed through the notes and files that come in the way. According to the developers, the control scheme was borrowed from Metroid Prime Hunters: the touch screen console is used for both inventory and camera control. The hero can use only one specific weapon, which forces the player to switch between the flashlight and the weapon. Another distinguishing feature of the game is a notebook. In it, the player can enter various information (for example, codes for closed doors).
The American version was criticized for the inconvenient system of conservation. The game was saved only at the beginning of the level, because of which the player could lose up to an hour of playing time in case of death. This claim was taken into account in the Japanese and European releases, where conventional savepoints were added. Another correction - the enemies are not reborn, if the player returns to the already passed room.
The player takes control of an unknown man. The hero finds himself in a mysterious hospital, inhabited by nightmarish creatures, not remembering anything of his past. Wandering through the corridors, he learns that he once killed his wife and daughter. Now his goal is to survive, and also to find out whether he is really involved in the death of his family.
Craig Harris from IGN called the visual component of the game outstanding: "The lighting effects and work with textures in Dementium The Ward are special if we consider the capabilities of Nintendo DS." He also noted the realization of the flashlight, saying that "although it does not resemble more technologically advanced games, it has no equal in its category". Pete Seller of Deeko spoke about the game more positively: "Visually the game is delicious: every element of design is aimed at creating an atmosphere of fear." In general, the version for Nintendo DS was criticized for its short duration and poor replayability, the system of preservation, and also for monsters evolving on the passed locations, complicating the passage.
On September 22, 2008, the Japanese Psychiatric Association protested against the sales of the game. According to them, "although the title uses a real psychiatric term, the game itself uses images of hostile patients."
Worldwide, more than 100,000 copies were sold for the Nintendo DS.
The name of the game comes from the same medical term.
‹
›
Home
View web version