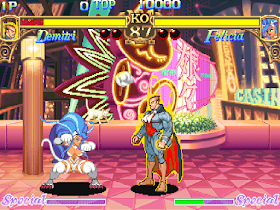 Genre: Action
Perspective: Side view
Gameplay: Arcade, Fighting
Visual: 2D scrolling
Narrative: Horror
Published by: Capcom Co.
Developed by: Capcom Co.
Released: 1994
Platform: Arcade Machine
Quite an interesting fighting game, performed in the style of horror. The topic of course is taken interesting, shlestnut among themselves a variety of dark forces and see what happens. You can choose from 10 characters from different corners of the globe, here you and Frankenstein, and the mummy, and the vampire, and many more interesting. After 9 standard characters, you will have to battle with two equally simple monster bosses. Graphically, the game looks great: the colors are all bright, despite the themes, everything is detailed. Arsenal of techniques is also impressive, all 6 buttons are used, plus there is a choice of the speed of the game. Music, according to subjects, sounds gloomy and frightening.
‹
›
Home
View web version