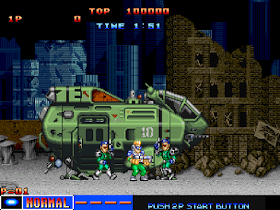 Genre: Action
Perspective: Side view
Gameplay: Platform
Visual: 2D scrolling
Setting: Cyberpunk / Dark Sci-Fi
Published by: SNK Corporation of America
Developed by: SNK Corporation
Released: 1991
Platform: Neo-Geo
The player (s) control Rick and / or Brook, two veteran soldiers, who are sent by an unspecified "federal government" to a fight in a last attempt to save the Earth from a military supercomputer that is in charge of all the military androids. The Gameplay consists of battling through large numbers of enemies, collecting power-ups and defeating several bosses at the end of the stages. This makes it comparable to titles like Metal Slug or Contra in terms of gameplay.
In this title you can notice the hand of some members of Irem, who would later create Metal Slug.
‹
›
Home
View web version