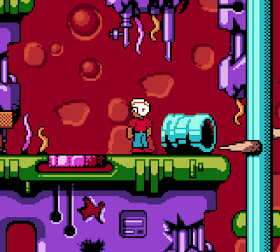 Genre: Action
Perspective: Side view
Gameplay: Arcade, Platform
Visual: 2D scrolling
Setting: Sci-Fi / Futuristic
Published by: Activision Publishing
Developed by: David A. Palmer Productions, id Software
Released: 2001
Platform: Game Boy Color (GBC)
The game was created as a sequel and at the same time as a tribute to the series of games in general and does not have an episode number. id Software was not the main development partner, although it retained editorial control over the game, and Adrian Carmack developed several sketches for the game. The idea of the game for Game Boy Color came from John Carmack and id Software, who turned to Activision Corporation, which, in turn, invited David A. Palmer Productions to become a game developer.
‹
›
Home
View web version