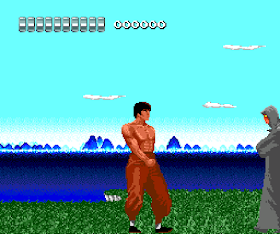 Genre: Action
Perspective: Side view
Gameplay: Beat 'em up / Brawler, Martial Arts
Visual: 2D scrolling
Published by: NEC Technologies
Developed by: Hudson Soft Company
Released: 1989
Platform: TurboGrafx / PC Engine
A terrible game from Hudson Soft. I did not even expect it from her. Some super-big guy (similar to Bruce Lee) disgustingly fights and fight against the same healthy and boring on the schedule enemies. Look at what games should not be! The only thing that saves the game is her age. It was one of the very first games on the PC Engine (for the Japanese version).
‹
›
Home
View web version