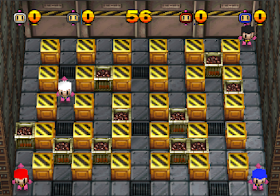 Genre: Action
Perspective: Bird's-eye view
Gameplay: Puzzle elements
Interface: Direct Control
Setting: Sci-Fi / Futuristic
Published by: Vatical Entertainment LLC
Developed by: Hudson Soft Company
Released: 2000
Platform: Nintendo 64 (N64)
In many ways, the game resembles Bomberman 64. There are no jumps, only power bombs. The player can detonate bombs at a distance. However, unlike the circular explosions of the first saga of Nintendo 64, the explosions in the second are executed with the crosshead.
In The Second Attack, Bomberman finds a mysterious egg as he celebrates his victory over Altair and Sirius on a hot spring planet and decides to take it with him as he explores the space in his ship. One day, however, Bomberman's ship is engulfed in a black hole, and he wakes up to find himself a prisoner. While in jail, the egg suddenly begins to open. The creature inside turns out to be a charabom named Pommy. With the help of Pommy, Bomberman is able to escape.
Bomberman discovers that there are some elemental crystals being picked up by the evil Rukifellth, and the Astral Knights, who guard them. Along the way he meets Lilith, a girl apparently working for the same purpose as him. Later he meets her several more times throughout the game. It is also discovered that one of the Astral Knights is none other than Regulus (now under the name Bulzeeb), who returns for the rematch from the previous delivery and thus resolve their differences with his archrival.
Once Bomberman defeats the first five Astral Knights, it opens the way to the ship Noah, the cause of the black hole and the headquarters of the BHB army. On the inside, he faces his most difficult challenges. The game consists of two endings. In the bad ending, Bomberman meets Lilith but suddenly she undergoes a change in herself and asks Bomberman and Pommy to keep going, when they leave, Lilith is Possessed by the goddess Mihaele, and heads towards the final confrontation of Bomberman and Rukifellth, who reveals that he has been possessed by the demon Sthertoth. Although Bomberman defeats him, Mihaele appears to try to stop him, however the goddess is possessed by him and becomes the god of Chaos. The fight intensifies and Bomberman defeats Sthertoth. Rukifellth and Lilith seem to be recovered, but Sthertoth appears again and can not be destroyed, so Lilith in a last effort helps Bomberman and Pommy escape the ship which is about to explode, however Lilith decides to stay sacrificing herself help them, Bomberman and Pommy escape, after that Sthertoth reaches them in space and when he is about to destroy them, the power of the goddess and the demon collide with each other dissipating in a big explosion. Although the ship Noah remained intact, the bodies of Lilith and Shtertoth do not appear. The game ends with the credits and the ship of Bomberman and Pommy flying in space in the hope of finding Lilith again and they go to the next planet to find their whereabouts (which happens in the last battle of Bomberman against Bulzeeb).
In the good end, Bomberman and Bulzeeb meet and the battle is unfinished when Mihaele appears in front of them. The goddess begs him to give him his elemental stone to defeat Shtertoth who is still alive, Bulzeeb rejects the request and decides to give it to Bomberman because he considers his rival is the most appropriate, and then leaves to face Rukifellth. Lilith tells Bomberman and Pommy everything that happened in the bad ending and what will happen now that Bomberman manages to collect all the elemental stones. They all head back to the Noah ship where they discover that Sthertoth's power is still active. Mihaele confronts Bomberman to remove all the stones, but falls defeated and heads to the hall of Rukifellth. Bulzeeb faces Rukifellth but nothing can be done against him and he is badly hurt. Bomberman arrives for the final fight and Bulzeeb gives him the rest of his powers so he can defeat the demon, then he kills Bulzeeb with a black hole. After the intense battle of Bomberman and Sthertoth, he falls defeated and Mihaele appears to join with him against his will and become the angel of light and darkness with the intention of destroying and recreating the universe, but the Angel is defeated by Bomberman. The Angel chooses to believe that Bomberman can defend the universe and disappears by releasing Lilith and Rukifellth, and then uses the power of the stones to revive the Astral Knights. They bid farewell to Bomberman, thanking him for having saved them and each one taking different courses. Lilith and Rukifellth decide to leave on the ship Noah and finally, Bomberman and Pommy leave for an upcoming adventure.
This game gives origin to the Bomberman universe. The universe was created by an angel divided into two halves, in light and a dark entity, the dark side tried to take over all of creation, but the side of light created the seven elemental stones and warriors that could control them to fight against the darkness. The luminous side won and the dark entity was sealed in the eighth stone, the celestial stone. The events in the game are set in motion when Rukifellth finds the stone and by touching it is possessed by the dark entity, which then brainwash the warriors created by the light to do his will (only Regulus could resist it) and sends them to Find the seven elemental stones, so you can regain your true form, in this case, the Sthertoth demon.

In addition to the mentioned features, the game brought many new features, for example: More heads and more levels, a new and improved arsenal consisting of the use of elemental stones for different explosions with the bombs, a store to buy various items of utility in addition to the pieces to customize Bomberman in multiplayer mode, maps, enemy guides, heart containers, and pieces of secret armor. He also has the ability to feed Pommy by giving him different types of evolution improving his skills. Pommy can also be played by a second human player with a second controller.
‹
›
Home
View web version