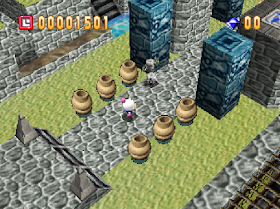 Genre: Action
Perspective: Bird's-eye view
Gameplay: Arcade, Platform
Visual: 2D scrolling
Art: Anime / Manga
Interface: Direct Control
Setting: Sci-Fi / Futuristic
Published by: Nintendo of America Inc.
Developed by: Hudson Soft Company
Released: 1997
Platform: Nintendo 64 (N64)
The first 3D version in the history of the Bomberman franchise. Mixture platformer with the classic gameplay series. In terms of gameplay has changed a bit - it was possible to pump a bomb, so that it would cause great damage. But such a bomb, unlike the usual one, can not be picked up or kicked. The plot of the game is this: a homeworld of Bomberman is attacked by a family of space pirates and tries to destroy all its inhabitants. In order to get on the ship of evildoers and punish the guilty, you must disable its defensive fields. Graphics and sound are performed at a good level, but to the best representatives of the genre are not enough.
‹
›
Home
View web version