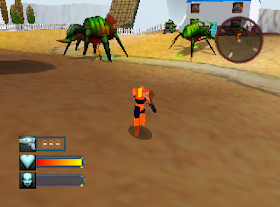 Genre: Action, Racing / Driving
Perspective: Behind view
Setting: Sci-Fi / Futuristic
Published by: Midway Home Entertainment
Developed by: DMA Design Limited
Released: 1998
Platform: Nintendo 64 (N64)
Shooter from the 3rd person. A game created by megapopular GTA III authors. You are a super soldier Adam Drake, who returned back in time to stop the invasion of aliens. The game takes place in 4 time and geographical segments: the First World War in Greece, the Second World War on the island of Java, the 60s in the USA and the 90th in Siberia. The game has a wide variety of weapons, enemies and the ability to control more than 60 vehicles. Average graphics and music are compensated by a very interesting and long gameplay.
‹
›
Home
View web version