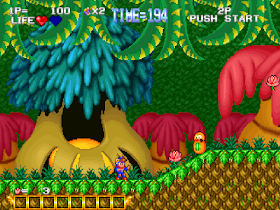 Genre: Action
Perspective: Side view
Gameplay: Platform
Visual: 2D scrolling
Published by: SNK Corporation of America
Developed by: Alpha Denshi Kōgyō Co.
Released: 1991
Platform: Neo-Geo
The player controls a young hero named Blue, whose mission is to save the peaceful planet Raguy. This has been invaded by the evil Daruma Empire, which plans to exploit the planet's natural resources and contaminate it. Blue has the ability to stun enemies, pick them up and throw them as projectiles. You can also reduce the size yourself to access hidden areas. A second player can take control of Princess Fa, who has powers similar to Blue.
‹
›
Home
View web version