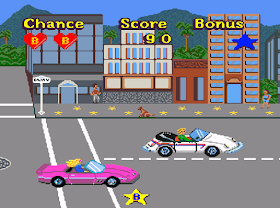 Genre: Action
Perspective: Side view
Gameplay: Arcade, Managerial / Business Simulation
Visual: 2D scrolling
Published by: Hi-Tech Expressions
Developed by: Bonsai Entertainment, Tahoe Software Productions
Released: 1993
Platforms: Super Nintendo (SNES), SEGA Genesis / Mega Drive
The game is a kind of simulator of life Barbie. From her working days to the weekend and rest. You will have to do everything that Barbie would do every day, if she existed (do not be discouraged if I told you the truth, that she does not exist, just like the elder brother to the youngest that Santa Claus does not exist). You will have to travel from one end of the city to another to work out in the gym, hone your skills as you need to behave on the podium. By the way, then at the end of each level you will have to participate in the fashion show. And from memory to restore the combination, mastered in the sports hall. Just in your spare time you can wake up skating, biking, skiing, etc. By collecting items scattered around the levels, you can open a hidden bonus, which gives you the opportunity to dress and decorate Barbie as she looks on the cover of the magazine.
There is an opportunity to play together. It will be two parallel games and the characters will not ever cross.
‹
›
Home
View web version