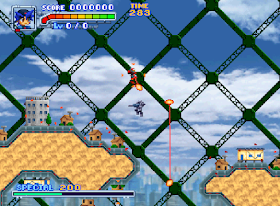 Genre: Action
Perspective: Side view
Gameplay: Arcade, Shooter
Vehicular: Mecha / Giant Robot
Art: Anime / Manga
Setting: Sci-Fi / Futuristic
Published by: ESP
Developed by: Treasure Co.
Released: 2000
Platform: Nintendo 64 (N64)
The game had a simple plot (although slightly different in each of the Japanese, North American and European versions) which was shown through dialogs between the phases or interruptions of dialogues, with images of the characters, when approaching certain objects in the middle of a game. Two young wick pilots, Riki and his sister Mami share the driving of a powerful humanoid robot Bangai-O and fight against the villains of the "Cosmo Gang", guilty of fruit smuggling, and who have a lot of turrets, bombs and robots throughout the 44 levels.
Bangai-O, the player's wick, is control in the 8 directional senses just like the shot, controlled by 4 buttons. There are two shooting modes represented by the main pilots: Riki fires red guided missiles while Mami fires blue lasers that bounce off the walls.
There is a special attack consisting of a 360 degree burst of the current type of shot. The number of shots fired by the special attack is between 40 and 4 00, depending on how many enemy bullets are on the screen and how close the player is when the attack is made.
At the beginning of the phase only two special attacks are available and as we are destroying enemies and scenarios we obtain additional objects and even an increase of special attacks of up to 5 using the recharge effect as a parameter to use each of the attacks.
The number of explosions that take place at a particular moment is shown at the top of the screen and determines how much the special caskets are recharged and what kind of fruit is obtained by the defeated enemies. The greater the number of explosions, the more special energy is produced and the more valuable fruits are obtained. Therefore, the tactic of success in the game is based on counteracting the enemy attack with the special attack.
It uses a combos system instead of an explosion meter. After destroying at least 100 enemies in a quick combination with a special attack or not, the player has a combo meter that controls the number of enemies destroyed. When the combo is stopped, a menu of options is opened that allows the player to choose between improving his weapon power, reloading his life, having a points bonus or temporary invincibility. The level of improvements, the life fill, and the bonus points are determined by the size of the combo, invincibility is only given as an option if a very long combo has been made.
The special attack is usually ineffective. It must be charged (holding the button down) in order to reach its maximum power.
Riki's shots do more damage than Mami's. Mami's shots are half-guided by attacking enemies after bouncing off a wall.
‹
›
Home
View web version