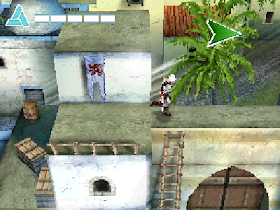 Genre: Action
Perspective: Side view
Gameplay: Stealth
Visual: 2D scrolling
Published by: Ubisoft
Developed by: Gameloft Srl
Released: 2006
Platform: Nintendo DS (NDS)
The game is an arcade with a side view and up, but the gameplay is diluted with various mini-games that use a touch screen. The combat system is a combination of weak and strong attacks, as well as combo strikes. The player is available seven different types of weapons: a hidden blade, Altair's sword, a crossbow, high-explosive bombs, smoke bombs, throwing knives and a hook. With the help of the latter you can knock opponents off your feet.
Weapon and character skills can be unlocked using special balls that are hidden on the game levels. The game has three levels of difficulty.
The main character in Assassin's Creed: Altaïr's Chronicles is Altaïr Ibn-La'Ahad, a Grand Master of the Assassin League. The story of the game is about the 12th century during the Third Crusade, during which Crusaders fought against the Saracens for control of the holy city of Jerusalem. The player's task is to steal the Holy Sepulcher from the Templars, an artifact with a special power that can decide the outcome of the Crusades. Later in the game, it turns out that the chalice is the first great love of Altaïr Ibn-La'Ahad.
‹
›
Home
View web version