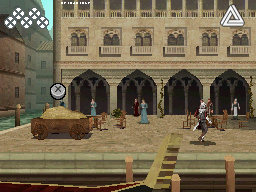 Genre: Action
Perspective: Side view
Gameplay: Platform, Stealth
Visual: 2D scrolling
Published by: Ubisoft
Developed by: Griptonite
Released: 2009
Platform: Nintendo DS (NDS)
The game is an arcade with a side view. The main character is Ezio Auditore. At his disposal is a hidden blade, an ordinary sword and throwing knives. Each mission in the game contains a specific goal, which the player must perform in order to pass the level.
The game takes place in Spain in 1491, in the interval between the events of Assassin's Creed II. Ezio Auditore da Firenze goes to this country to save his comrades from the Order, who were seized by the Inquisition, and uncovers the Templars plot.
‹
›
Home
View web version