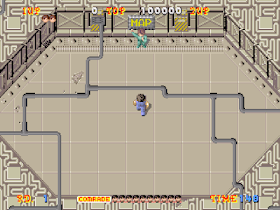 Genre: Action
Perspective: Top-down
Gameplay: Arcade, Shooter
Setting: Sci-Fi / Futuristic
Published by: SEGA Enterprises Ltd.
Developed by: SEGA Enterprises Ltd.
Released: 1986
Platforms: Arcade Machine, SEGA Master System
A rare and little-known arcade, simple in form and complex in content.
Two heroes, a man and a woman (you can choose whom you will play) on a spaceship captured by malicious aliens need to get to the emergency escape hatch, rescuing from the limbs of the aliens of the crew members and having had time before the big bomb explodes (the game formally limited in time).
Gameplay is a fairly standard arcade-shooter with a view from above and sometimes from the side. Run forward and destroy enemies, collecting rare bonuses. The enemies themselves are quite unusual: this time it's toothy either worms or slugs that can suddenly appear directly from the floor and eat the hero (quite unusual). At the end of each level we are waiting for the boss - as a rule, also very interesting. Bosses, by the way, are slightly anthropomorphic in the game. It is also necessary to note the presence of special "cartographic" screens - when approaching this one, you can immediately view the map of the whole level.
The graphics for the release year look pretty decent, especially in the "side" mode (included during the fight with the bosses). Greatly drawn and the character, and especially the interior of the ship, in some scenes of the graphics it seems almost 3D. The last feature that is worth noting is the ability to play simultaneously for both characters together for one computer.
More, alas, there is nothing to say. A good and rather complicated arcade with unusual opponents, Alien Syndrome will surely appeal to many fans of the classics of the genre.
‹
›
Home
View web version