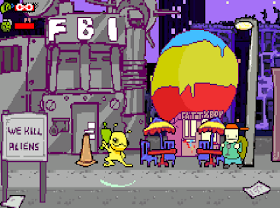 Genre: Action
Perspective: Side view
Gameplay: Shooter
Visual: 2D scrolling
Setting: Fantasy, Sci-Fi / Futuristic
Published by: ZOO Digital Publishing Ltd
Developed by: Behemoth
Released: 2006
Platform: Game Boy Advance (GBA)
It was unlucky for the "green man" - his plate fell not somewhere in Nevada, but just near the central office of the Federal Bureau of Investigation (FBI). People do not understand and are afraid. They, in turn, are afraid of us even more, that's the beginning of the acquaintance with the shooting, which grows into a huge bloody battle. For local "people in black" there is only one law of hospitality - "a good alien is a dead alien". We are looking for a way out of this aggressive planet (the FBI somewhere completely occupied with a working UFO) and shoot all those who intrusively try to turn our body into a laboratory exhibit. Of weapons - a simple plasma pistol, which is easily attached to the accelerator, flamethrower or rocket launcher. We move along the signs, jump on buildings and signboards, and constantly shoot back from the enemies. Caricature scenery, as well as it is necessary for game on Flash-technologies, bright and ridiculous. On the screen goes machinery (cars, armored cars, helicopters), runs half a dozen FBI agents, appear and burn under fire armored bosses. We deal with them traditionally, as each has no more than three or four actions, under which you can adjust almost instantly. It frightens the speed of reaction of ordinary opponents. The infantry, fleeing from all sides, evades our shooting, rolls and jumps aside, shoots in all directions accurately, covers each other with fire, and reinforcements by helicopter "smoke" the player from the upper floors down.
‹
›
Home
View web version