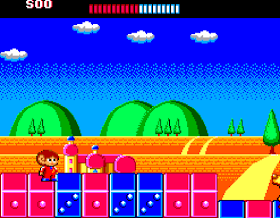 Genre: Action
Perspective: Side view
Gameplay: Platform
Visual: 2D scrolling
Published by: SEGA of America
Developed by: SEGA Enterprises Ltd.
Released: 1989
Platform: SEGA Master System
After saving the Wonderful World from the tyrant, Alex goes on a journey and soon learns that the villain Ziggarat stole from the night sky of Eris twelve sacred stars. Climbing his native Eternal Mountain, Alex consults with the ancient wizard Dulleda, who directs our hero to go through 6 locations and find 12 magic balls in which Ziggarat hid the stars. As in the first part, Alex runs, jumps, sometimes shoots, but also successfully swims and flies on a balloon. True, there is no novelty. We have quite an annoying platformer, as it is necessary to avoid many and often inefficient, because time is ticking. Naturally, otherwise the arcade machine would not be released. Alex helps a pretty girl Stella. But in general, the game is not so hot, though, the graphics, of course, are steeper than in the first game.
Master System: the game ported great, perfectly adapted for 8-bit. The system of accounting for damage and bonuses was changed somewhat. It's a pity, they left only Alex in the role of a game character, but they even saved their voices. The difficulty is slightly higher.
What's interesting - in the manual they write that Alex's father returned. In fact, it will not be possible to save it until several years later. The game featured Opa-Opa, the main character of the game "Fantasy Zone".
The game is from the Alex Kidd series, which already means high popularity. However, this game is not quite like that. First, you need to dodge your enemies all the time; you do not have any weapons. Therefore, you have to jump that there is urine. And besides, time is ticking! True, you can then find weapons, but of course, losing a couple lives ... But the plot is pretty standard: the evil biker Jiggarat stole from the sky all the stars. Who else but Alex can get them back? Graphics on some levels looks good, but not perfectly. Sometimes it is repeated. Unfortunately, this is not a hit, but still worth a try.
‹
›
Home
View web version