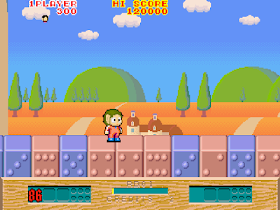 Genre: Action
Perspective: Side view
Gameplay: Platform
Visual: 2D scrolling
Published by: SEGA Enterprises Ltd.
Developed by: SEGA Enterprises Ltd.
Released: 1986
Platform: Arcade Machine
Harsh tests - a wonderful thing, but sometimes they reach absurdity. In this nice-looking platformer, originally released on arcade machines, your heroes can die every 20, no, every 10 or even 5 seconds. They will be killed decisively by everything that you will see: toy cars and trains, playing cards, fish and jellyfish, rolling balls and sounds of music; They will fall into countless traps and constantly fall under the platforms.
You can play together - boy Alex and girl Stella. On the one hand, it's fun, but on the other - the characters are pushed and great interfere with each other, although the pleasure of playing does not diminish. Yes, at some point this crazy hardcore ceases to cause bewilderment and leaves only a hilarious hysterical laugh. Sometimes we find weapons that clear our way, but the chance of keeping it for a long time is not great.
According to the plot we are looking for 12 stolen zodiac signs - as many in the game and levels. The desired object is hidden at the end of the level and is protected by a particularly sophisticated trap or a large cluster of opponents, through which it is practically impossible to break through without losing a life. In fact, the game only 6 different levels: after their passage and the return of stars to the sky, we pass them again, but with increased complexity.
‹
›
Home
View web version