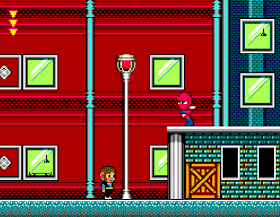 Genre: Action
Perspective: Side view
Gameplay: Platform
Visual: 2D scrolling
Published by: SEGA of America
Developed by: SEGA Enterprises Ltd.
Released: 1990
Platform: SEGA Master System
Again from the Alex Kidd series and not the most popular game. However, from time to time Alex appears to us in different forms. Then he rides a bike (BMX Trial), then saves his girlfriend (in Miracle World), then he collects the Lost Stars, etc. And then suddenly he became a ninja! Since his girlfriend was kidnapped, the spirit of Shinobi settled in Alexa to help save the girl. It's original!
‹
›
Home
View web version