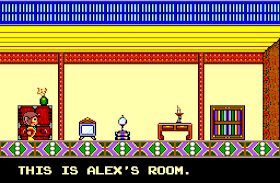 Genre: Action, Strategy / Tactics
Perspective: Side view
Gameplay: Platform
Visual: 2D scrolling
Published by: SEGA of America
Developed by: SEGA Enterprises Ltd.
Released: 1989
Platform: SEGA Master System
Again, the game from the series Alex Kidd. But not the platform, not the BMX, but something pulling the title of RPG-Adventure. And this already means that the game is worthy of your attention. The plot, however, is stupid as ever: a friend of Alex reports that somewhere the Arcade Store was opened, but the path there was drawn on a map, which was torn in 8 parts. You have to find them, get out of the castle, and soak a couple of ninjas ... This game is far from a masterpiece, but for that time, and even take into account the platform itself, I consider this game good (but not excellent). Although some abroad do not see anything good in this game. Conclusion: judge for yourself by playing in it.
‹
›
Home
View web version