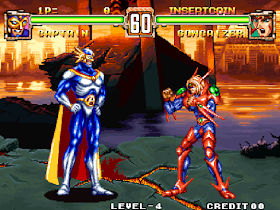 Genre: Action
Perspective: Side view
Gameplay: Arcade, Fighting
Art: Anime / Manga
Setting: Post-Apocalyptic, Sci-Fi / Futuristic
Published by: SNK Corporation of America
Developed by: Technos Japan Corp.
Released: 1995
Platform: Neo-Geo
A series of earthquakes end up destroying Japan almost entirely in the year of 1999; years later the cities manage to be rebuilt with high technology. This is where the Belnar Institute was created, apart from implementing a traditional educational system, several disciplines of military combat are also taught. This in order to have generations trained to prevent future hecatombs on a global scale. The origin of these disasters responds to a man named Shizuru Ōzaki, who is the current director of the institute and has awarded certain candidates a mysterious gem known as "Caizer Stone" that is capable of turning its users into superhumans. One of them, Isato Kaiza, was accidentally granted the Caizer Stone with which he would become the Gowcaizer, the Flaming Hero. He and other young fighters will try to thwart planeszaki's plans that he plans to finish what he started in 1999, destroy the Earth in its entirety.

The user has a repertoire of ten characters to play and then have free choice to choose their opponents controlled via the game's CPU. As each battle is won, the character chosen by the user will be able to obtain a special movement of each defeated opponent, much like Mega Man and will add to the list of movements of each character in use. It is also possible to perform your own desperate movements when the energy bar is about to run out with a flickering red-colored glow, similar to the Fatal Fury and King of Fighters games, where sequential combinations of lever and button movements are executed. Also the game offers the classic "Zoom In ~ Zoom out" as in the Art of Fighting and Samurai Shodown. So also has a system of chain attacks or combos very effective for the time.
The system of controls, as well as the other titles that run on the Neo-Geo plate is still the same: ☼ + ⒶⒷⒸⒹ, which follow the same order of weak punch, weak kick, strong punch and strong kick.

In 1996 Masami Ōbari and his team from Studio G-1 are given the task of producing an animated version in video format on VHS, LD and DVD, where the story and concept would be the same as the game, however with a darker and more serious environment. Some characters would be omitted in their entirety or would only be limited to making a fleeting cameo, and would concentrate on the main and popular characters. Also these would suffer some small changes or adjustments in their designs once conceived in 1995 by the same Ōbari. The OVA was serialized in three parts where it would be added to an exclusive villain apart from the master Ohga (Shizuru Ōzaki) named Omni Exist, who would be behind the dark plans of the destruction of planet Earth.
In 1997 the three OVA would be edited to form a single feature film entitled "Voltage Fighter Gowcaizer: International Version" that would be a kind of Director's Cut version that would include a new character that only appears on the drama CDs, it would be a girl named Necrocaizer (Elfie Elfman), who according to this version she would be the one who granted the Caizer Stone to Isato Kaiza. This version includes a new Opening sequence at the beginning and some small scenes were omitted.
The three OVA and film were adapted to English by U.S. Manga Corps of Central Park Media in 1997.