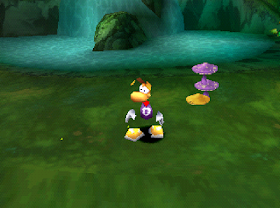 Genre: Action
Perspective: Behind view
Gameplay: Platform
Setting: Fantasy
Published by: Ubi Soft Entertainment Software
Developed by: Ubi Soft Entertainment Software
Released: 2000
Platforms: PlayStation (PSX, PS1), Nintendo 64 (N64), Game Boy Color (GBC), Nintendo DS (NDS)
Globox and Rayman are locked in a cell on the pirates' prison airship. Globox gives Rayman a special Lum which Globox got from Ly Fairy. This gives Rayman back a part of his old powers. They go in search of the fairy Ly, who Rayman can return all his powers, and flee by sliding together through a ventilation shaft, which ends unexpectedly in the high. Rayman loses sight of Globox after the fall. In search of Globox, Rayman meets the minions who help him find Globox and fight the pirates. The minions tell him that he has to find the four magical prehistoric masks to awaken the spirit of the world "Polokus", saving the world from the pirates.
Rayman 2 is 3D, unlike its predecessor. The player moves through linear levels with robo-pirates, puzzles and lums that can be collected and are important to progress in the game. Rayman has little skills at the beginning of the game, but as you progress through the game, you learn a few. With Rayman's hands, the player can hit or shoot energy balls. Later, Rayman can swim or swing on Purple Lums. Rayman's second most well-known skill, in addition to the energy balls, is his "Helicopter Hair" with which he can float in places. There are also some elements of the game that Rayman can interact with, such as explosive barrels that you can carry and throw, a water snake that you can use for waterskiing, or live rockets that you can ride. In addition to the main levels, there are bonus levels, in which you race as a child of Globox against a robo-pirate, while gaining you get health or power bonus for Rayman.
Rayman 2 has been ported to various platforms. So the game first appeared for Nintendo 64 and Windows in October 1999 in the US and Europe. In 2000, a Sega Dreamcast version appeared this time in Japan, as well as a PS1 and PS2 version entitled Rayman Revolution. This included that the different levels are no longer selected by the world map. The levels are now linked to a big game world that you have to explore. The PlayStation version was synchronized in different languages, which Rayman and Co. could now properly speak. 2001 (USA) and 2002 (Europe) released Rayman 2: Forever, which is the only 2D edition of the game. With the launch of the DS, Rayman DS was a launch title. The same was the case with the launch of the 3DS, in which Rayman 3D was in the lineup. In 2010, Rayman 2 was also released worldwide for IOS, which was removed from the App Store. You can also buy Rayman 2 in the Playstation Network as a PS1 version, making the game available for several other Playstation platforms.
‹
›
Home
View web version