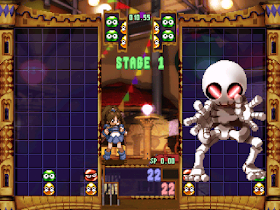 Genre: Puzzle
Perspective: Side view
Gameplay: Falling Block Puzzle
Visual: Fixed / Flip-screen
Interface: Real-Time
Pacing: Direct Control
Published by: Compile
Developed by: Compile
Released: 1999
Platforms: PlayStation (PSX, PS1), Nintendo 64 (N64)
The gameplay of the games of the series resembles games "Tetris" and Columns. The playing field is a glass, into which are falling multi-colored round translucent creatures with eyes, called Puyo. The player must fold them in the same color so that they touch. When you create a chain of four or more Pouy, they disappear from the game board. A feature of the game is the ability to create series - the player can arrange Pue in such a way that when creating a chain and disappearing one group of creatures, the next series will form. Another feature is the presence of a game mode against a computer or a second player, where when creating a series by one player, the "empty" Pouy falls into the glass of another, disappearing only when a group of colored creatures disappears next to them.
‹
›
Home
View web version