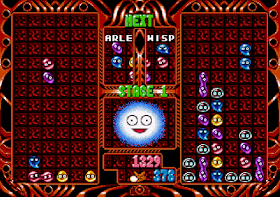 Genre: Puzzle
Perspective: Side view
Gameplay: Falling Block Puzzle
Visual: Fixed / Flip-screen
Art: Anime / Manga
Pacing: Real-Time
Interface: Direct Control
Published by: Compile
Developed by: Compile
Released: 1996
Platform: PlayStation (PSX, PS1)
This is the second series of the game Puyo Puyo (in Europe, presented in the form of Dr. Robotnik's Mean Bean Machine). This game is slightly reminiscent of Tetris, and from the first part is different new characters from the anime series Aruru Nadja popular in Japan. And as various innovations in the gameplay of the game. For example, Sousai (Garbage Countering) - counteraction, now you can repel enemy strikes, sometimes sending it - Refugee Beans they are Garbage and Ojyama back to him. Understand this is not difficult, because the game has a built-in instruction, though in the Japanese language. But to play this game it is absolutely unnecessary to know. The game has 8 opponents. At 6 different locations (backgrounds). You have to go through the whole tower, from its base to the top.
‹
›
Home
View web version