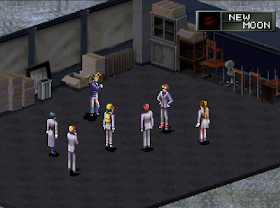 Genre: Role-Playing (RPG)
Perspective: 1st-person, Bird's-eye view
Visual: Isometric
Art: Anime / Manga
Pacing: Turn-based
Published by: Atlus Software Inc.
Developed by: Atlus Co.
Released: 1996
Platform: PlayStation (PSX, PS1)
This fascinating game in the RPG genre has already gained immense popularity in Japan, and now it finds an increasing number of fans in other countries. The action takes place in modern Tokyo, but you have an incredible journey in many dimensions, fighting demons who are armed with swords and small arms and possess magical abilities (in the game they are called "persons"). You start the game as an ordinary teenager, but in the course of fighting against persons you will also acquire supernatural power. You are led forward by a very long and intricate storyline, which provides for several different continuations. The attractiveness of the game is facilitated by an excellent management system. You can quickly move from one place to another, you are given detailed information about the progress in the game, the strength of opponents. Finally, you can reincarnate yourself in different monsters and experiment with options for action.
Fit everything else and the game's graphics - both during the game action, and plug-in video topics. Watching the battle from a certain height, you get an absolutely clear image. When using magic properties, holographic effects are applied. It helps the action and music, and special sound effects, although not very numerous.