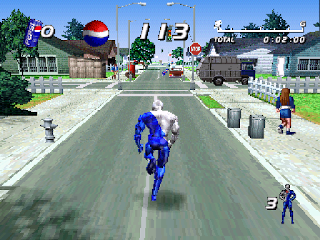 Genre: Action
Perspective: Behind view
Pacing: Arcade
Visual: Real-Time
Setting: North America
Published by: KID Corp.
Developed by: KID Corp.
Released: 1999
Platform: PlayStation (PSX, PS1)
The game was created by KID in the framework of an advertising campaign in Japan and performed in the genre Foot-On Racing. A certain scoundrel terrorizes the city by devastating machine guns with Pepsi. Local residents are indignant at large riots that even the authorities can not restrain. But here, the surprisingly fast-footed, but absolutely brainless Pepsiman athlete, who will solve all the problems, takes over. For this Pepsiman just enough to run forward dodging obstacles and objects that the disgruntled citizens throw at him and at the same time to collect banks from Pepsi. The final level will be a machine with a drink that is so popular with the people.

No Down on Reverse Running Stage