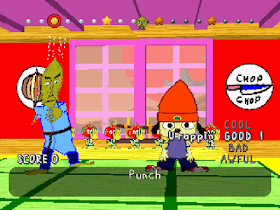 Genre: Action
Perspective: 3rd-person
Gameplay: Music / Rhythm
Narrative: Comedy
Published by: Sony Computer Entertainment America
Developed by: NanaOn-Sha Co.
Released: 1997
Platform: PlayStation (PSX, PS1)
Apparently, PaRappa The Rapper is the strangest and most original game for the PlayStation. At first glance, it may even seem ridiculous, but do not rush to turn away from it. Your main goal is to win the love of windy Sunny Fanny, and for this you have to learn a lot: drive a car, fight like Bruce Lee, trade ... And of course, to dance rap. To this end, you reproduce phrases in the rhythm of rap, which you are taught by extravagant mentors. If you hold out, all six required levels in the Normal mode, you will become the Master yourself and get an opportunity to improvise. Please note that you have a rival - handsome man's name is Joe Chin, and he does not lose time in vain. That he did not take away from you Sunny, win the crown of King Rap in the Freestyle Rap stage. PaRappa The Rapper is also interesting because its creators have placed 2D characters in a 3D world (believe me, it looks very unusual and cool). There is also an opportunity to record your results - thanks to the replay option.
At first, PaRappa The Rapper may seem like a child's toy with stupid graphics and wretched sound. But it takes quite a bit of time to penetrate the spirit of Parppa Rapper and become a real pro on the part of rap. In fact, the slightly insane graphics of the game perfectly matches its cheerful pace and otvyaznom mood. Most of the jokes in the game are under the guidance of one of the five rap instructors, which makes you and PaRappa tap the rhythm in sync with the teacher's rap. It seems easy? But a real rapper must have a lightning-fast reaction and an iron sense of rhythm.
Finally, we waited for the world's first video game in the style of rap! Developers from SONY have created a very unusual work of the genre of "rhythmic action", in which magnificent volume graphics are combined with excellent rap music. Very interesting are the toy characters, in the first place the main character is PaRappa, the beginning rapper. However, the idea of ​​the game is not new: it somewhat resembles the famous music game Quest For Fame, and even more - the old game Follow The Leader, only here by checking your observability and dexterity become the rhythms of rap. The game has six stages. On each of them, PaRappa must learn some art, in the end, to win the heart of his girlfriend Sunny Fannie. So, in the first stage, Master Onion teaches him the art of kung fu. The teacher shows the movements in the rhythm of the rap, giving out the corresponding string of symbols (they appear at the top of the screen). After that, you in the role of PaRappa should play the shown, pressing the buttons of your controller in the right order and at the right time. In the next stages PaRappa will learn from other teachers who have their own rap style, in particular - drive a car, bake a holiday cake and so on. The advantage of PaRappa The Rapper over other games is that sounds are visualized and generated in real time. The quality of your repetitions is evaluated by a special indicator. While you are on the evaluation of Rappin 'Good, everything is going fine. If the score drops to Rappin 'Bad, then the teacher becomes angry, and the music becomes more and more strange. And when the score Awful appears, the music will stop, and you will have to start from the beginning. Those who succeed in carrying out assignments will have the opportunity to improvise without a teacher. Set the Rap Meter sensor to Cool - and you're in the Freestyle Rap stage. If here you start to get confused, then the teachers will appear again. If you pass the game in Freestyle mode, you'll get the King of Rap!
‹
›
Home
View web version