Oneesan to Issho! Janken Paradise (3DO) 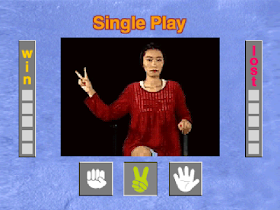 Genre: Strategy / Tactics
Perspective: 1st-person
Gameplay: Timed Input
Art: Full Motion Video (FMV), Live action
Pacing: Real-Time
Narrative: Adult
Published by: Intarus
Developed by: Intarus
Released: 1994
Platform: 3DO Interactive Multiplayer
The screenshot shows before your eyes an image of three characters:
The Rock (fist), Scissors (index and middle fingers in protruding mode), and Paper (palm) ... No associations?
Of course, the old-good children's fun ... Only in this game it acquires an unexpectedly adult meaning: exposure (in the sense of removing clothes) of presymptious young girls of Japanese origin by beating those into the same Paper. And, strangely enough, of all the erotic programs described in this collection, only this one can be called a game in the literal sense of this expression. Primate - yes, stupid - no doubt, but - a game, not just an entertaining erotic film. After all, the game - it's excitement, and Rock–paper–scissors - there is an extremely stimulating activity, as you will certainly see.
So, what do we have? Five young Asian maidens are going to play with you in an interesting game. First, choose the opponent, guided by the parameters of her appetizing forms, which are clearly shown in a special graph with a clever inscription present in the icon with the alleged prey.
Then - you can start the process itself, which looks something like this: the lady, shaking her limb, yells out the unpronounceable Japanese numerals, and when she thinks she's counting three, she throws the icon out before your eyes. Your bright goal is to throw out another badge that defeats the symbol of the opposite (if someone does not know - the stone is cutting scissors, the scissors are cutting the paper, the paper is wrapping the stone).
Control is carried out with the keys A, B, and C for each symbol, respectively. After winning the round, you choose the upper or lower, at your discretion, half of her body, which is just something to remove. The number of garments for each lady is always five, so the game goes to five wins of one of the participants. Having won, you can contemplate a very beautiful and tasteful clip made with your rival, where she dances, paced and poses, while shyly covering the causal places with her hands and details of the landscape (in Japan there is a clear boundary between eroticism and pornography: if suddenly the girl shows pubic hair - so, dirty porn. After this curious demonstration - go to another gerl. And so - five times.
The main problem is the moment when the icon is ejected: if we are toss out synchronously, then in this game YOU SHOULD SHOW YOUR SYMBOL STILL HOW THE CHAIR SAYS IN JAPANESE WORD TWO !!!
Well, that's all about this game. More than nothing to say, you can only praise the aesthetic side of the FMV again. THE END, GUYS, GAME OVER.
‹
›
Home
View web version